By Ashley A. Keiser, PhDApril 8, 2021Commentary, Community Events, In the News
No Comments

Contributed by Ashley A. Keiser, PhD

Sex differences in Alzheimer’s disease risk have been extensively reported. Particularly, women exhibit greater cognitive impairment and the rate of acceleration of impairment is observed to exceed men. Women are also twice as likely to be diagnosed with Alzheimer’s disease. Although previous cross-sectional studies that capture a single data point in time suggest greater levels tau in brains of women, this study is important because it is the largest of its kind to use a longitudinal design to examine the rate of tau accumulation with increasing age in the same individual. Therefore, findings from this study highlight faster tau accumulation in females as a potential explanation for such biological sex differences in tau load. Further studies are needed to uncover factors mediating faster tau aggregation in the female compared with the male brain.

A number of factors that predominantly affect women or that simply differ between sexes, contribute to the disproportionate risk, pathology and experience for women with Alzheimer’s disease. For example, lifestyle factors such as number of pregnancies have been associated with greater Alzheimer’s disease pathology in brains of women. Following menopause, a life stage accompanied by intense decreases in levels of the hormone estradiol, neurological symptoms associated with Alzheimer’s disease are observed to increase, pointing to a protective role of ovarian hormones. Disorders affecting cognition such as post-traumatic stress disorder (PTSD) and depression affect women at a rate at least twice that of men. A history of depression and/or post-traumatic stress disorder have been reported as a risk factor for Alzheimer’s disease in both sexes. However, diagnosis of PTSD or depression in women may have greater impact overall for Alzheimer’s disease risk given greater prevalence for these disorders in women.

The need for understanding the sex-specific factors and mechanisms contributing to and capable of preventing cognitive decline or impairment exists in both normal aging individuals in addition to those with Alzheimer’s disease. Efforts to adapt an unbiased approach such as with next-generation sequencing, enables researchers to step away from comparing female-derived data to already established male findings. These efforts will aid in identification of novel pathology, treatments and presentation of disorders impacting cognitive decline such as in Alzheimer’s disease. And here at UCI MIND, efforts are already underway to increase sex disparities research in Alzheimer’s disease, in partnership with Maria Shriver’s Women’s Alzheimer’s Movement.

If you would like to learn more about how male and female brains differ in learning and memory, join me for Ask the Doc next Thursday, April 15th at noon on YouTube or Facebook for live discussion and Q&A. 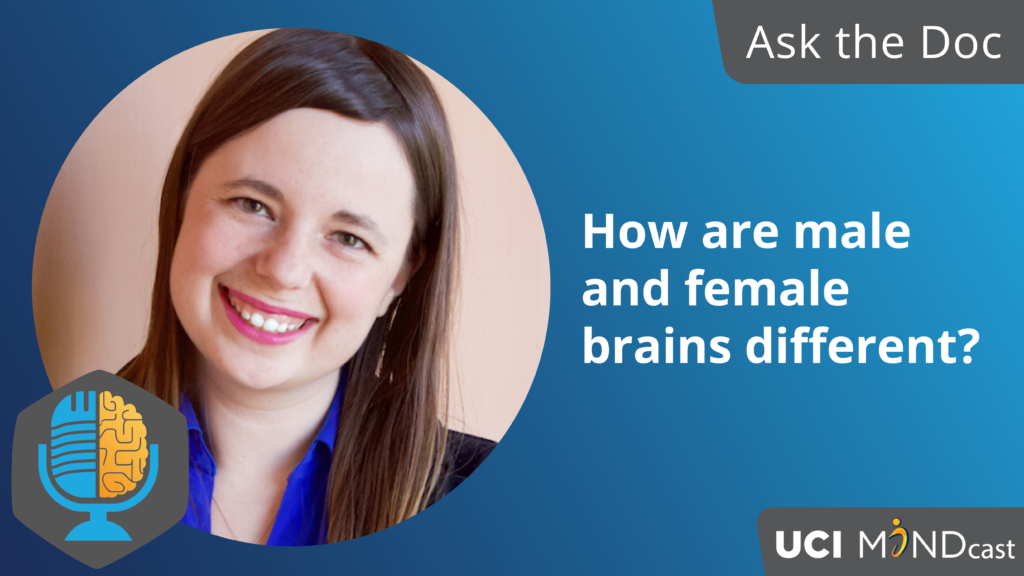 Dr. Ashley Keiser is a postdoctoral fellow with Dr. Marcelo Wood in the UCI Department of Neurobiology & Behavior. She earned her PhD in Biopsychology from the University of Michigan. Dr. Keiser’s research examines molecular and epigenetic mechanisms that mediate learning and memory in the young and aging female and male brain. Her work aims to provide insight into treatments for disorders impacting memory, many of which afflict women at a higher rate compared with men.