The FDA has approved aducanumab (Aduhelm™). Now what?

By Joshua Grill, PhDJune 7, 2021Commentary, In the News, Participants
No Comments

The data that the FDA used to decide to approve aducanumab were controversial, resulting from three clinical trials – one Phase 1B trial and two large Phase 3 trials. The controversy centered around the differential results in the two trials – one showing a clinical benefit (slowing of clinical progression) of aducanumab and other failing to do so. It was also the case that the studies were stopped early because Biogen had performed what is called a “futility analysis” and decided that the trials were unlikely to succeed in demonstrating a benefit of aducanumab. Despite the lack of consistent clinical findings, in all three studies aducanumab was shown to effectively lower brain amyloid levels. Controversies aside, the advances made by these trials are extremely important to the field and would not have been possible without the heroes who participated in these studies, including here at UCI MIND.

Why was aducanumab approved?

The FDA announced that accelerated approval was “based on the surrogate endpoint of reduction of amyloid beta plaque in the brain—a hallmark of Alzheimer’s disease.” This means that aducanumab has been approved to lower amyloid plaques in the brain, but not to slow cognitive decline or functional progression. It appears that an additional study of aducanumab will be required by the FDA to confirm that lowering plaques does result in a clinically meaningful benefit.

The approval of aducanumab will complicate future studies of it and other candidate treatments for Alzheimer’s disease. Exactly what design those studies will have, who will participate in them, and how approval will impact ongoing and future clinical trials will be an extremely important topic in the coming years. We recently published an article on this very topic.

What does this mean for other anti-amyloid treatments?

Who is appropriate for treatment?

The highlights of prescribing information state only that aducanumab is “indicated for the treatment of Alzheimer’s disease.” Presumably, this will be further outlined to include patients similar to those enrolled in clinical trials – namely patients with Mild Cognitive Impairment or mild dementia in whom a positron emission tomography (PET) scan indicates amyloid plaques are present. Patients will also need to undergo magnetic resonance imaging (MRI) before starting aducanumab and the available prescribing information also recommends MRIs twice more in the first year of treatment.

The additional MRIs recommended in the FDA prescribing information are meant to ensure that patients are not having a negative reaction to aducanumab. In clinical trials, up to 40% of patients experienced abnormalities visible on MRI. Most often, these side effects did not cause symptoms, but careful management especially when they do cause symptoms, will be essential to use of aducanumab.

What will it cost?

Biogen says that the annual costs of aducanumab will be $56,000. How much additional cost could come with treatment and how much will be covered by insurance are important unknowns at this time. Similarly, what this will mean for coverage of amyloid PET scans, a requirement before starting therapy in the clinical trials, is unknown. One thing is for certain, families can’t afford to bear the costs of these scans and aducanumab, on top of all the other costs associated with having a family member with Alzheimer’s disease. 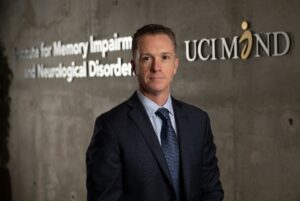 Joshua Grill, PhD, is an Associate Professor of Psychiatry & Human Behavior and Neurobiology & Behavior at UCI. He serves as Director of UCI MIND, Associate Director of the UCI Alzheimer’s Disease Research Center, and Leader of the Recruitment & Retention Unit for the UCI Institute for Clinical and Translational Science. His research focuses on clinical trials across the spectrum of Alzheimer’s disease, and he has published a number of important findings on trial design, recruitment and retention, and research ethics.